In the early 1930s, as more and more Catholic families relocated to Holbrook, they searched for a nearby church and found two; one in Ronkonkoma and one in Bohemia.  They adopted St. Joseph’s Parish in Ronkonkoma as their own.  Finding it difficult to attend Mass there because of lack of transportation, a bus committee was formed and funds were raised to transport children to religion classes at St. Joseph’s in Ronkonkoma, and to provide transportation for adults who had no other means of getting to Mass.

In 1948, this group of dedicated Catholics, established the Catholic Society of Holbrook.  As stated in the By Laws of this Society, its purpose was “to establish a Catholic Chapel in the Hamlet of Holbrook and to devise ways and means to raise the required funds to provide the Hamlet of Holbrook with a Catholic House of Prayer.”  After repeatedly petitioning the Bishop of Brooklyn, the Bishop finally formed a mission of St. Joseph’s parish in Holbrook.
​
Father Francis Liller of St. Joseph’s celebrated Mass each Sunday during the summer at the Civic Hall, which was located on the corner of Terry Boulevard and Grundy Avenue. In the fall and winter, people still traveled to St. Joseph’s.

The Society erected two shrines.  In 1958, Our Lady of Lourdes Shrine, which was located where the present driveway of Good Shepherd is now on Grundy Avenue.  In 1959, The Shrine of St. Jude, which is still located on Coates Avenue.

Finally, on June 24, 1970, the Diocese officially established the parish with Father Ronald Barry as pastor and Father Jack Moore as his associate. From the beginning, Father Barry expressed his belief that “the people are the church.” In an unprecedented manner, a vote by the people named the new parish the Church of the Good Shepherd.

Masses were held in a tent outside the Civic Hall, the firehouse, Greenbelt Recreation Center, the Cenacle and in parishioner’s homes.  The Good Shepherd Parish Center was built in 1971, celebrating its first mass in early December. ​ 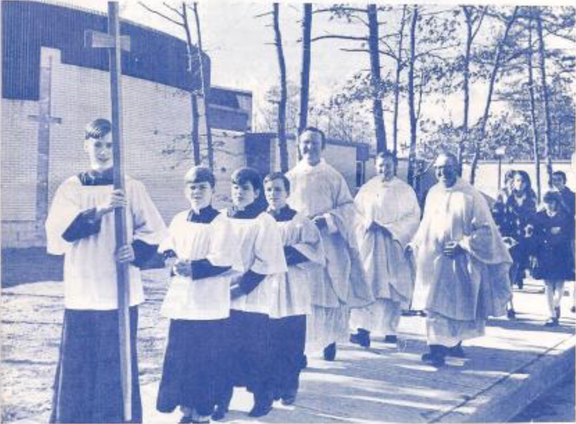 The procession in front of GS Parish Center for first Mass – Dec. 5, 1971, with Father Moore, Father Swiger, and Father Barry
It was SRO – Standing Room Only – at the Parish Center as the population of Holbrook kept growing. In the first eleven years, the Diocese assigned and transferred five pastors and eight associate priests. The Parish experienced financial troubles and struggled with differing visions. Tragically, two fires in 1981 and 1982 destroyed both the Parish Center and the attached residence.

​Father Thomas Spadaro arrived four days after the second fire. He calmed the fears and brought the people together for a common cause ... building a new house of worship for the people and a new residence for the priests. Four years of careful planning and vigorous fund-raising accomplished the goal.  The first mass in the new Church of Good Shepherd was celebrated on September 13, 1986. 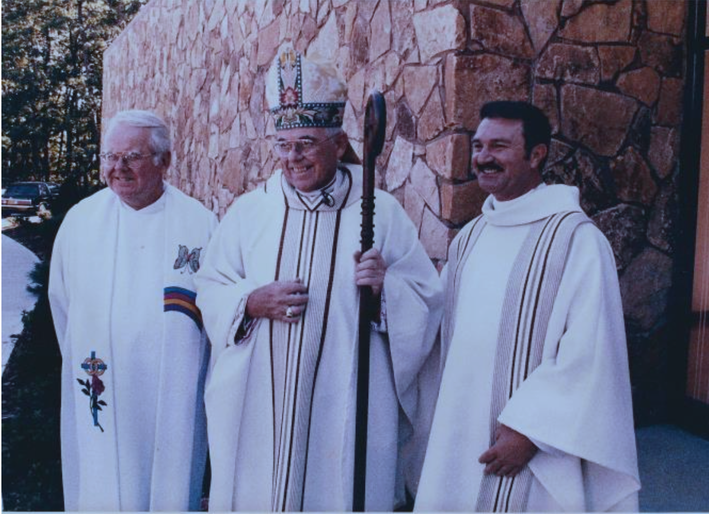 On June 26, 2013, Monsignor Gerard Ringenback arrived at Good Shepherd. Father Jerry’s installation as the sixth pastor of the Church of the Good Shepherd took place on Sunday, October 20, 2013. 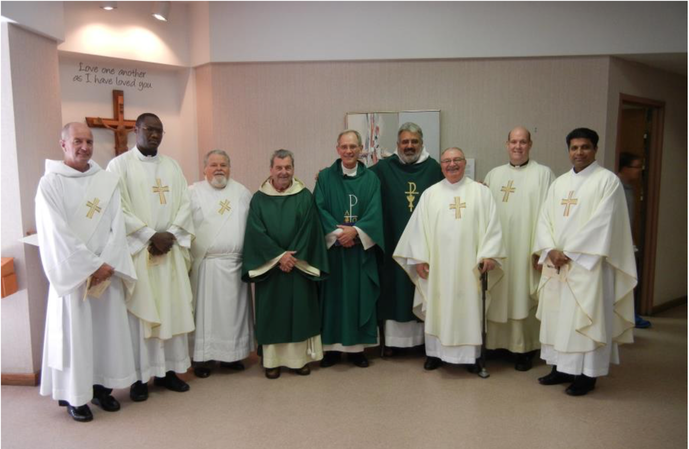 Msgr. Gerard A. Ringenback installed as Pastor of the Church of the Good Shepherd October 20, 2013 with Deacon John C. Newall, Father Aloysius Melly, Deacon Edward Tappin, Deacon Thomas O’Connor, Msgr. Gerard A. Ringenback, Father Jerry DiSpigno, Msgr. Thomas L. Spadaro, Father Gerald Cestare, Father John Rufus
With only a few months as Pastor of Good Shepherd, Father Jerry was faced with the task of much needed renovations of the worship space. “Remember – Repair – Renew” became the theme.  Remembering those who raised the funds to build the church under the leadership of Father Tom.  Its design and simple beauty had served the people well as a sacred place to come to worship as a loving and welcoming community of faith.  Repairing the interior and exterior building; reconstruction, restoration, redesign.  Renewing faith for those who come to celebrate the sacraments and worship God and invite those who need to discover and awaken their faith.

In 2014, Dream Sunday paved the way for a plan to make various repairs and improvements which included the interior of the church and the placement of a crucifix in the sanctuary.  Once again, it was the people who voted on what they thought would be best for Good Shepherd.  The Church Renovation Campaign began and the challenge goal of $1,500,000.00 was raised.

On the weekend of October 15-16, 2016, with the first phase completed, the main church reopened, celebrating the first mass with Bishop Nelson Perez presiding.  The redesign of the interior of the church incorporates the new with the old. 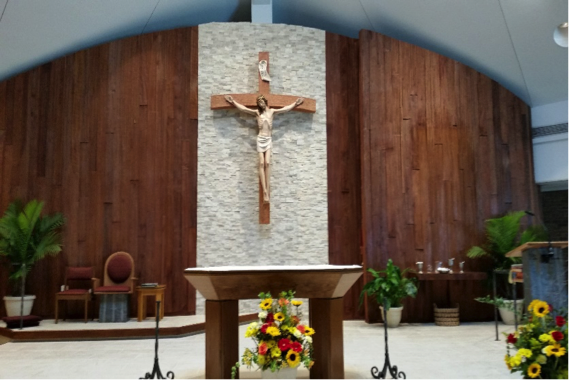 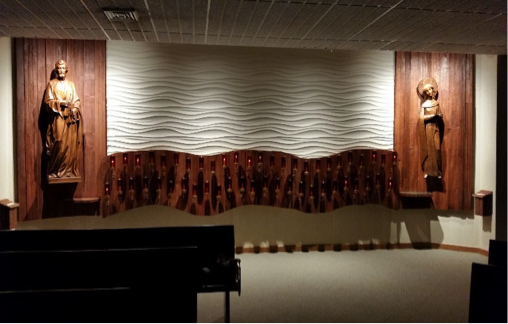 The Statue of St. Joseph and Candles
In January 2017, a new vision statement was conceived – Welcoming All, Awakening Faith and Serving Others.  The old statement gave Good Shepherd a guide and focus as the parish grew and developed.  It was time for a new statement that would best describe its present state and provide a reference point for its future.

Spring 2017 brought the second phase of the renovations; which included the repair and replacement of the heating and cooling system, the installation of the flat roofs, and the renovated Daily Mass Chapel and Blessed Sacrament Chapel.
On September 17, 2017, to mark the completion of the renovation project, there was a special blessing of the Daily Mass Chapel, which is the new home of the tabernacle where the Blessed Sacrament is reserved, and the Children’s Prayer Chapel (formerly the Blessed Sacrament Chapel).  To honor the occasion, a beautiful new set of liturgical vessels, cups and plates were introduced at all the masses.  Each item was memorialized by members of the parish.

So much more than a building, Good Shepherd continues to be a gathering of holy people who are united in faith, hope and love. ​​

On November 25, 2017, Bishop John Barres, the Spiritual Leader of the Diocese of Rockville Centre, celebrated mass at Good Shepherd.  Such an occasion as this, reminds us that we are part of the universal church.  The Bishop’s message for missionary growth throughout the diocese and spreading the gospel message to reach the un-churched is one shared by Good Shepherd, as the parish continues to welcome all, awaken faith and serve others. 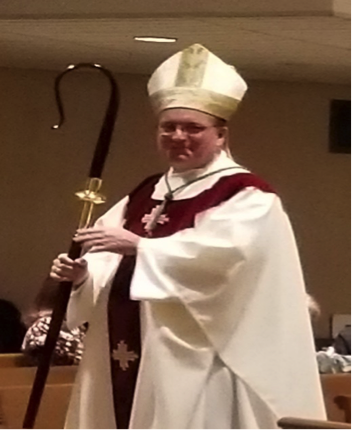 Bishop Barres
On May 27, 2018, a dedication ceremony was held for the newly installed statute of Our Lady, located on the lawn opposite the main church entrance.  This was made possible by funds raised through a Girl Scout Gold Star Project.  The Blessed Mother Mary is a lovely addition to Good Shepherd’s parish grounds. 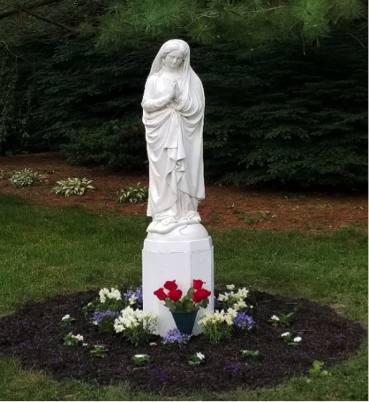 ​In June of 2018, Father Jerry retired.  Once again, Good Shepherd would welcome another change and embrace the appointment of a new pastor, Bishop Robert Coyle.  Bishop Coyle would not be just another ordinary new pastor.  He is an Auxiliary Bishop of the Diocese of Rockville Centre and spent 27 years of priestly service primarily as a Navy Chaplin in the Archdiocese of the Military, where he served men and women in the armed forces both at home and abroad.

​On November 10, 2018, the dedication of the Parish Flagpole was held following the 5:00 pm mass.  This flagpole was dedicated to the Military Veterans, Police Officers, Firefighters and First Responders and their families. 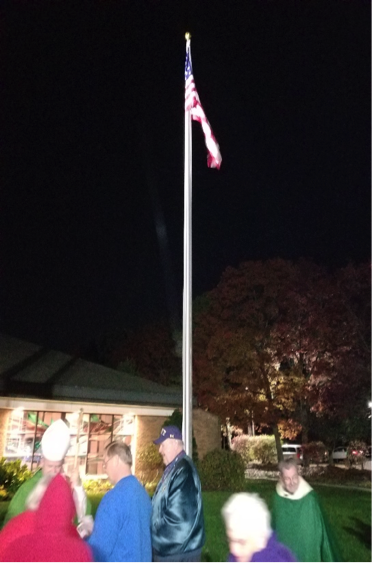 In December 2018, Bishop Coyle was appointed to serve as the Vicar of the Eastern Vicariate, of the Diocese of Rockville Center.  As Vicar, he represents the Bishop in this region.